In spite of all the reservations concerning topics like loading infrastructure, mileage or legal regulations, e-vehicles have started the catch-up in the statistics of new vehicles. The innovation premium, which was created by the Federal Government as an incentive, may certainly have been one reason for this success. Last year, 652 million euros of tax money were spent on more than 230,000 new car registrations. Thus, buyers of a purely electric vehicle can expect up to 9,000 euros when purchasing one, plug-in hybrids are funded with up to 6,750 euros when emitting a maximum of 50 grams CO2 per kilometre or having a purely electric range of a minimum of 40 kilometres. New electric vehicles are free from tax whereas the automotive tax for other vehicles is calculated  according to the CO2 emission. Furthermore, private loading points are supported with a subsidy of 900 euros per wall box.

All these measures have made the battery drive socially more acceptable. The increasing registration trend of electric drives already started in the last quarter of 2020. E-vehicles were well-positioned in the race with about 22 per cent. If this trend continues, the Federal Government’s goal of achieving between seven and ten million e-vehicles until 2030 will come true. Last year, more than one million e-vehicles including hybrids were newly registered in Europe.

The Car Institut Duisburg analyzed new registrations of fully electric vehicles in the months from January to February 2021. The first position is occupied by VW ID.3 with 3,691 vehicles followed by VW Up! with 2,661 units. Renault Zoe achieves the third position with 2,590 units and the Smart Fortwo with 2,516 units as well as the Hyundai Kona (2,485 units) are closely behind in fourth and fifth position. Model 3 from Tesla with 2,332 units and the BMW i3 with 1,680 vehicles follow in the sixth and seventh position, whereas position eight is reserved for the Audi e-tron ( 1,418 units). The VW Golf with 1,349 units and the Opel Corsa-e with (1,281 units) achieve the ninth and tenth position.

The newly edited Euro 7 vehicle emission standards of the European Commission can definitely be considered as a further boost for the breakthrough of electric vehicles. The emission of greenhouse gases is to be reduced by 55 per cent until 2030 based on the numbers in 1990. Thus, the Commission initiated the concept “Fit for 55”, which included a further demanding goal: Until 2030, a minimum of 30 million emission-free vehicles is  to be newly registered in Europe.

The appointed expert commission Advisory Group on Vehicle Emission Standards (AGVES) presented its recommendations to the European Commission. Due to previously published working papers, the abolition of the combustion engine was to be feared as  non-achievable requirements for the industry. Now the requirements were adapted to the technically achievable. The Euro 7 regulation will still remain ambitious. The German Association of the Automotive Industry (Verband der Automobilindustrie - VDA) expects the new limits to be under the currently valid Euro 6 by a factor of 5 to 10.

This realistic perspective will enable new model generations with combustion engine, which together with the more and more dominating Euro 6 models among the existing fleet of vehicles, will provide better air quality fast. The annually published data of the Federal Environment Agency have already demonstrated this success impressively. Without additional vehicles equipped with the latest exhaust technology, the necessary exchange of the existing fleet of vehicles, which is essential to achieve the climate goals, will probably not take place.

Lutz Leif Linden, the General Secretary at AvD (German Automobile Club) announced in a first statement: “The AvD is in favour of this realistic view of the technically achievable with regard to the Euro 7 regulation and its significance for combustion engines. Nonetheless, it should not be forgotten that vehicles of the current Euro 6d regulation are already to a large extent able to remain under the current limits during daily use. The combustion engine is able to add an invaluable contribution to achieving the climate goals by using alternative fuels like e-fuels or hydrogen based on renewable sources.”  Furthermore, the AvD illustrated that a responsible climate policy should not neglect the needs and financial possibilities of those people depending on their car and affordable mobility.

There is no doubt that electromobility will play an ever-greater role in the framework of individual mobility. Nevertheless, vehicles running on diesel and fuel will keep their important position on German and European roads. According to experts, about 35 million vehicles with combustion engines will be on the road until 2030.

Several specialized tyre dealers have already adapted to e-mobility. Thus, the training measures offered by associations like the German Federation for Motor Trades and Repairs (ZDK -Zentralverband Deutsches Kfz-Gewerbe) or the German Tyre Retail and Vulcanisation Trade Association (Bundesverband Reifenhandel und Vulkaniseur-Handwerk - BRV) have already had an impact. Specialized tyre trade will have to keep up to date. The technical equipment of the workshops and the employees‘ know-how concerning e-mobility will be absolutely essential.

Increase in offer of retreaded tyres

Michelin has been active in the truck retreading business with several treads of the brands Michelin Remix, Laurent retread and Recamic. Now the segment of long-distance traffic has been extended as well.

Bridgestone has announced the market launch of Techsyn together with Arlanxeo and Solvay. 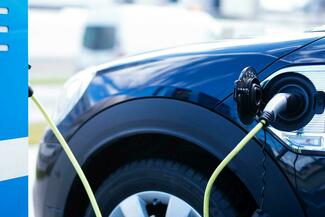